Department of Neurology was established in 1964 on the basis of the Almaty State Institute of Postgraduate Medical and prepared the staff for the republics of the USSR in those years institute had the All-Union of importance. 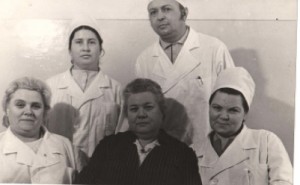 The Department of Neurology 1966.

From 1981 to 1999 headed the Department Professor Belyaev Y.

Belyaev Y. paid much attention to training of neurologists, epileptologist. It was from that time in the department began a period of study of epilepsy and clinical  electroencephalography.

Since 2005, the department manages Doctor of Medical Sciences, Professor Kamenova Saltanat, a graduate of the Moscow School of Neurology — Centre of Neuroscience Research of  RAMS, Moscow.

Since September 2010 teaching staff the Department of Neurology of the Almaty State Institute of Postgraduate Medical (The Head of Department Doctor of Medical sciences, Professor Kamenova S.U.) works at Kazakh National Medical University named after S.D.Asfendiyarov in the Center of continuing education.

Employees of the Department:

The Head of Education: Candidate of Medical Sciences, Docent of the Department Kuzhybayeva K.K.

The Professor of the Department: Doctor of Medical sciences, Professor Krasnoyarova N.

President of the Kazakh  National Association for Combating stroke;

The member of the worldwide organization “World Stroke” 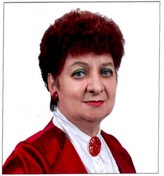 Academician of the American Biographical Institute

Member of the International Academy of musculoskeletal  medicine

Member of the Association of manual therapists and osteopaths of Kazakhstan 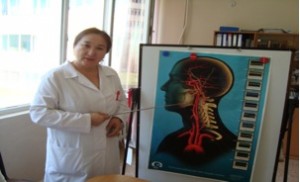 The Head of Education - Candidate of Medical Sciences, Docent of the Department Kuzhybayeva K.K. 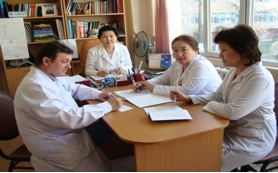 The production meeting of the department 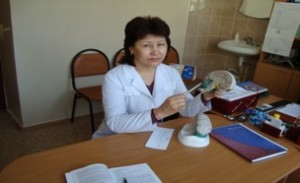 The Assistant of the Department - Candidate of Medical Sciences Nurmagambetova B. 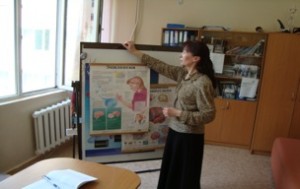 The Senior laboratorian is Sturova A.G.

Scientific research work of the department:

—      Effect of seizures on the function of speech and writing in children and their drug correction.

—      Epidemiology of cerebral stroke in Kazakhstan

Over the past 10 years, the department performed 2 doctoral and 8 candidate dissertations, prepared more than 20 clinical ordinators, are trained doctors-residents. Published over 600 scientific publications in different journals and anthologies, including foreign ones.

Scientific and clinical research of the department conducted within following the most relevant areas of modern neuroscience:

Are obtained  innovative patents for the invention:

We are constantly improving the educational process. Traditionally, the Department conducts the scientific and practical conference on the important issues of neurology and stroke, with the participation of leading specialists from different countries.

The department is equipped with modern teaching aids, video equipment, there are neurophysiological laboratory.