At the 65th UN General Assembly session (6 — 8 June 2011) it was stated that «HIV and AIDS is a global scourge, is one of the most formidable challenges to development, progress and stability of our societies and the world at large, and require extraordinary measures and comprehensive global response, and taking into account the fact that the spread of HIV is often a consequence and a cause of poverty.»

At the UN General Assembly expressed «serious concern … about the fact that the share of young people in the age group 15 to 24 years accounted for more than one third of all new HIV infections, and approximately 3,000 young people each day are becoming infected with HIV», and as «… a deep concern over the fact that … in Eastern Europe and Central Asia … the number of new HIV infections is increasing».
During the thirty years since the first cases of AIDS it has radically changed the world: AIDS has killed more than 30 million men and women, about 33.3 million people are infected with HIV and it has made over 16 million orphaned children.
In Kazakhstan, according to the Republican AIDS Center, now it is cumulatively reported about 18 000 HIV-infected people, a growing number of HIV-infected women. If at the beginning of the epidemic parenteral route of transmission through intravenous drug use was prevailed, but now increases the sexual route of transmission. In addition, in 2006 more than 100 children were infected with HIV in children’s hospitals in SKO.
To address this one of the most serious public health crisis, and for targeted training of health professionals in the areas of HIV infection and infections associated with medical care, Department of HIV infection and infection control was organized in January 2011 at the Institute of Postgraduate Education of the KazNMU named after S.D. Asfendiyarov.
Department’s clinical base is the City Center for Prevention and Control of AIDS, Almaty, where students have the opportunity to get acquainted with the work of all departments, aimed at providing consultative and diagnostic, therapeutic and preventive care for HIV-positive. Anarbayeva A. C., Candidate of Med. Sci are recognized in the country and the region of Central Asia specialists, working with international organizations, and providing advisory and methodological assistance to the countries of the region. 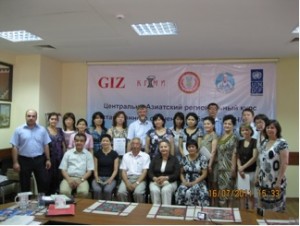 Thus, Dr Nugmanova has extensive experience in international organizations on issues of HIV and infection control, was directly involved in the preparation of new textbooks on these issues, now is also a tutor of the Regional Distance Learning Program on HIV and AIDS for health professionals in Central Asia, together with specialists from Kyrgyzstan and Tajikistan under the auspices of GIZ, Germany. Nugmanova is a co-founder and and a member of the Board of Trustees of the Public Fund «Bota», established with World Bank assistance, in accordance with the Agreement between the governments of Kazakhstan, the United States and the Swiss Confederation to support children and young people from low income families in Kazakhstan.

Dr.Anarbaeva is an experienced clinician, also works at the treatment and consultative department of the City AIDS Center, has extensive experience working with HIV-infected persons, including those at antiretroviral therapy.
In addition to traditional lectures, the Department uses a variety of innovative forms of training: clinical analyzes, the decision of case studies, role playing, discussions in small groups, «brainstorming», seminars, conferences, preparation of presentations of groups in the format of PowerPoint.